Far down in the south end of the parish, the Boeuf meanders around Etier’s Bend, named for Alexander Etier who homesteaded here in the 1800s.

The Etiers Came from France 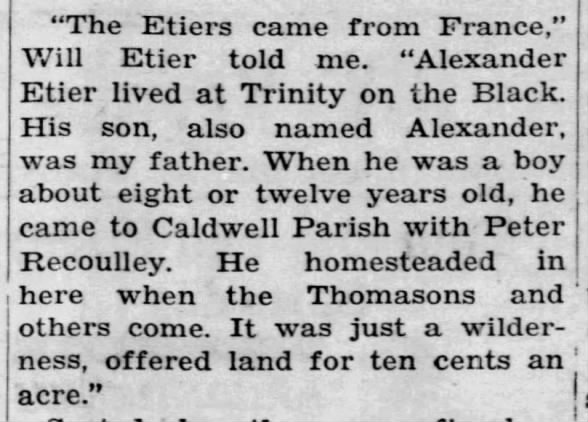 How About the Steamboats?

Seated by the open fireplace where a log burned slowly, we sipped black coffee Mrs. Etier had served us. Mr. Etier spieled off some French and momentarily I felt like I was in south Louisiana.

“What do you remember about the steamboats?” I asked Mr. Will.

“Oh I remember all of them,” he said. “The Era No. 10, I remember when she burned up there in McElroy’s Bend. She was loaded with cotton. Burned bales of cotton floated by here a long time.”

The cause of the fire on the steamboat, Mr. Etier thought may have started from burning brush on the river bank. Sparks ignited the bales of cotton stacked on the boat deck.

Rocky shoals in Boeuf River was news to me. Mr. Etier tells me the gravel was pumped out and sold to Caldwell Parish for road construction. Then he went on, “I believe the last steamboat to pass here was ‘The Clifford’ operated by Capt. Swazey in 1935.”

“Yes, they were good old days. I can remember when my brother and I’d be picking cotton, he’d wish for the boat to come and bring us molasses.”

Bird Hunting on the Boeuf

Mr. Etier mentioned the days of bird hunting when egrets inhabited areas around nearby lakes and bayous.

Along about noontime, we got up to leave. Outside was the good smelling odor of wood smoke. Down a steep bank, muddy water in the Boeuf rippled downstream. We climbed in the car and cranked up to go.

Mr. Etier looked fondly at the Boeuf and said, “The first Ford I saw went by here on a steamboat.”