The house was bought by Tom Haney in 1906 and was located just north of the school on Hwy. 17. It has since however been torn down. Some suggest that the reason Jesse James may have liked coming to Delhi, was an interest he had with a girl there. The James brothers were also said to have stayed with the Carpenter family, just a mile or so north of Dunn. It was there that the Carpenter family had a hotel on the stagecoach road. 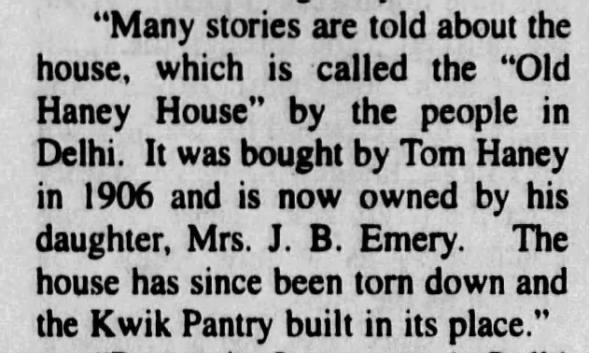 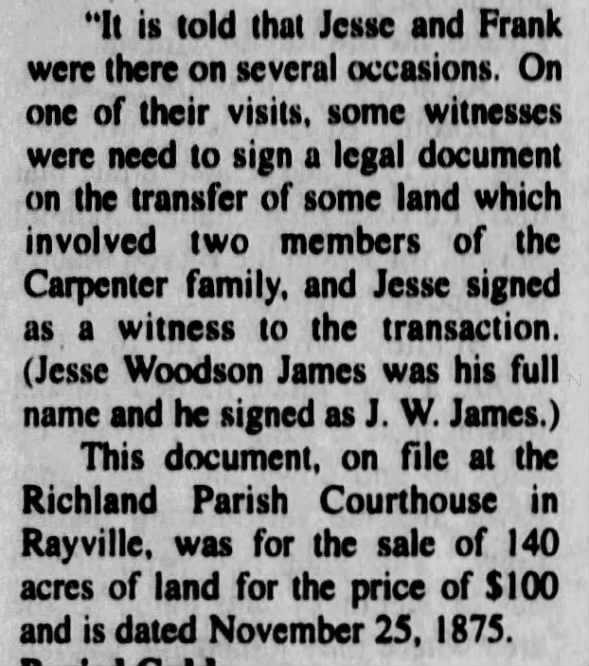 According to Mrs. Evelyn Cochran of Rayville, Jesse was supposed to have buried gold on the old Carpenter Place at a time when he wu being chased by the law. She recalls being taken there by her father when she was a very small child, to dig for “Jesse’s gold.”

“There would be droves of people there digging, and holes were dug all over the property, but no gold was ever found, as far as I know,” she said.

The courthouse and jail have been torn down, the old hanging tree removed, and Old Floyd, once the parish seat and a very active place is now a quite fanning community (in West Carroll Parish).

In an interview with E. B. “Dip” Carson of Rayville, an interesting sidelight was brought out. Noticing houses all over the area with a lone pine tree in the front yard and being curious, he asked about the trees. He was told by an old Confederate soldier that people who were friendly with the James boys planted the pine trees as a sign of their friendship.

Any time any member of the gang was in the area, he looked for this sign, and knew that the people who lived there could be trusted. He also said that the people who know Jesse and Frank would not talk about it to anyone. He wu told that because of their feelings for Jesse, or because of their fear of him, they kept quiet about their acquaintance with the notorious outlaw. It has been told through the years that Jesse’s password was “A dead man tells no tales.”

This was perhaps a reason for keeping quiet. The James gang had a hideout east of Delhi, a short distance from Waverly, to be used when the whole gang came to the area. When the two brothers came along, they’d spend the time with friends and relatives.

An interesting story has been told by a number of people. Some say it happened in our area; others say it was in Arkansas. It seems that the James boys arrived at the home of a widow one day to rest. As she prepared supper for them, they could sense her worry. Jesse asked if she wu worried because they were there.

She said no, but told them that the next day a man was to come to collect the mortgage payment due on her home. This accounted for several hundred dollars, and she did not have the funds available. After questioning her about the man who would come to collect, Jesse gave her the money to pay the debt, and urged her to get a signed receipt of payment.

The next day the man came, collected the money, gave the receipt and left. , He was only a short distance from the widow’s home when he was robbed by Frank and Jesse.

Many times during her life, the late Mrs. Sarter of Alto told a story that has been passed down through the years by members of her family. It went like this: In 1871, her grandfather, John Baker, lived on what was then known as Reed Plantation, a few miles from Delhi. One day, as he was on his way to town, he met four men he had known in Missouri. Knowing they were outlaws, he decided to take them to his home rather than go into town with them. When they arrived at his home, he introduced them to his wife as “Brother Smith” and three helpers in a missionary endeavor in the community.

Mrs. Baker greeted them cordially and prepared a supper of smoked sausage, hominy, Louisiana yams, corn pone and coffee. During the visit, “Brother Smith” noticed the Bakers’ small baby in her crib, and remarked how beautiful he was. After asking permission, he took the baby and held her for some time. (The baby, who was at that time six weeks old, was Mrs. Sartor’s mother, Beulah Baker Williams.)

Young Will Baker was taken for a walk around the yard by “Brother Smith” and as they talked Will was encouraged to always do what his parents said, and to do the right thing. The family was given a dollar bill, which he took from the lining of his coat. It was later rumored that he had over $60,000 in his coat at the time.

After they left, Mrs. Baker said to her husband, “John, Brother Smith was one of the most cultured, tender men I have ever met. Didn’t you notice how tender and kind he wu with the children?”

Several months later, Mrs. Baker was told that “Brother Smith” was really Jesse James and his “helpers” were Frank James and two of the Younger brothers. His life of violence ended in violence when a person who wu supposed to be his friend shot him in the back in April 1882.