Ballas Brothers George and Pete, of Rayville, Give Update On Assignments In War – WWII – 1945 (George Ballas later becomes the inventor of the weed eater.)

Flight Officer George C. Ballas, 20, and Seaman First Class Pete C. Ballas, 18, sons of Mr. and Mrs. Charles Ballas of Rayville. George enlisted June 26, 1943, received his wings at Roswell, N. M., September 30, 1944, and until his recent return to the States, has been based in Italy. Pete enlisted August 10, 1944, received his boot training at San Diego and amphibious tactics training at San Pedro, Calif. He has been in the Pacific theatre since March 10, 1945.

Georg Ballas would have an interesting career following the war. He is the original inventor of the Weed Eater. Quoting from the New York Times:

“Mr. Ballas poked holes in a tin can, strung strands of fishing line through the holes, attached the contraption to a rotary lawn edger, and the Weed Eater was born — or what is more generally known as the weed whacker, a device that has reshaped the landscaping industry and delighted amateur gardeners.”

Mr. Ballas’s invention has become “one of the crucial tools to our industry, especially for landscaping,” Mark Fisher, director of horticulture at the Brooklyn Botanic Garden, said on Thursday. “Of your landscape and turf crews, everybody has one.” 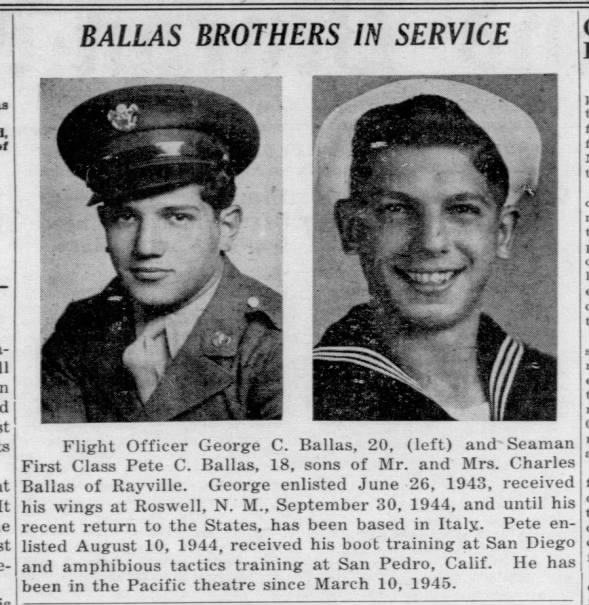