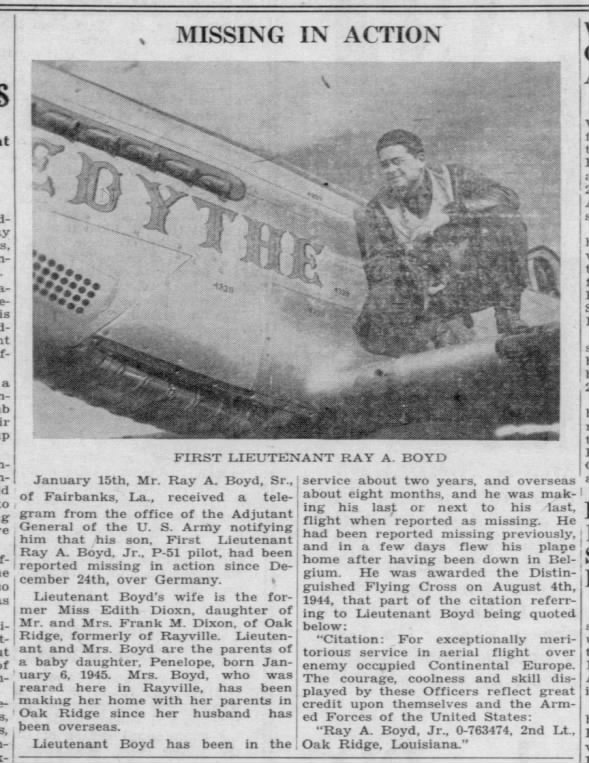 FIRST LIEUTENANT RAY A. BOYD January 15th, Mr. Ray A. Boyd, Sr., of Fairbanks, La., received a telegram from the office of the Adjutant , General of the U. S. Army notifying him that his son First Lieutenant Ray A. Boyd, Jr., P-51 pilot had been reported missing in action since December 24th, over Germany. Lieutenant Boyd’s wife is the former Miss Edith Dixon, daughter of Mr. and Mrs. Frank M. Dixon, of Oak Ridge, formerly of Rayville. Lieutenant and Mrs. Boyd are the parents of a baby daughter, Penelope, born January 6, 1945. Mrs. Boyd, who was in Rayville, has been making her home with her parents in Oak Ridge since her husband has been overseas. Lieutenant Boyd has been in the service about two years, and overseas about eight months, and he was making his last or next to his last, flight when reported as missing. He had been reported missing previously, and in a few days flew his plane home after having been down in Belgium. He was awarded the Distinguished Flying Cross on August 4th, 1944, that part of the citation referring to Lieutenant Boyd being quoted below: “Citation: For exceptionally meritorious service in aerial flight over enemy occupied Continental Europe. The courage, coolness and skill displayed by these Officers reflect great credit upon themselves and the Armed Forces of the United States: “Ray A. Boyd, Jr., 2nd Lt. Oak Ridge, Louisiana.” Mrs. Ray Boyd, of Oak Ridge, received a letter the first of this week from her husband, Lt. Ray Boyd, written May 18th, from somewhere in France. Lt. Boyd was reported missing December 24th when his fighter plane was shot down over Germany. Mrs. Boyd formerly made her home in Rayville and will be remembered as Miss Edith Dixon, daughter of Mr. and Frank Dixon. Lt. Boyd stated in his letter that “It’s good to be back under Uncle Sam’s wing.” He was liberated by the Russians from a prison camp in northeast Germany. He expects to be home sometime during the first of June. Before entering the army Lt. Boyd’s home was Fairbanks.